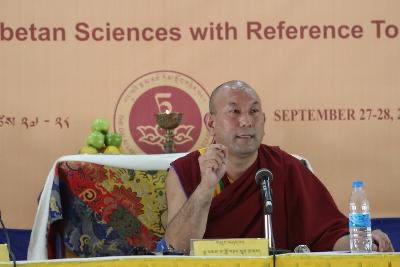 For thousands and thousands of years, human beings have pondered the questions, "What am I?" Geshe Rongpo Lobsang Nyendak will answer the question of identity and the nature of the self from a Buddhist perspective.

In 2001 Geshe Rongpo Lobsang Nyendak was personally appointed by His Holiness the Dalai Lama as a Member of Parliament (MP) at the 13th Parliament Term of the Central Tibetan Administration (CTA) and served in that capacity for five years.

Currently he is the Chief Editor of the Collected Works of His Holiness the Dalai Lama in Dharamsala, India.  Geshe Lobsang Nyendak is the author of 13 books and an editor of over 40 books. Born and raised in Tibet, he is currently a PhD candidate in Philosophy at the Dalai Lama Institute for Higher Education in India. He received his Geshe Lharampa Degree (equiv. to PhD in Philosophy/Religion) in 2011. He has taught Buddhist philosophy at colleges, universities and monasteries in Tibet, India, and the U.S.

Oct 9
Where to from Here?